The analog Peak+Hold module allows to play and control analog synthesizer equipment by using a drum with a pickup (or any other percussive signal source).
9 different CV/signal outputs are generated by one percussive input signal. The outputs are providing a dynamic hold voltage (linear and logarithmic), a dynamic impulse signal e.g. for triggering filters or delays, a dynamic release signal (linear and logarithmic), an envelope and a gate signal. Additionally, the original sound (amplified) is available for further signal processing.
The input stage is equipped with adjustable level and trigger controls and a filter for flexible adaptation of different percussive instruments – such as long or short sounding, high or low drums and cymbals. Furthermore, there is a 2nd input to cascade two Peak+Holds or to add another signal source.
In general, the Peak+Hold will be delivered with a piezo pickup included as standard accessory to the module, but it is also available without.
Without pickup, the Peak+Hold can be used for creating additional CVs and triggers from any percussive input signal (e.g. from a drum machine or an audio player). 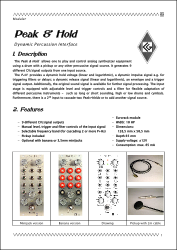 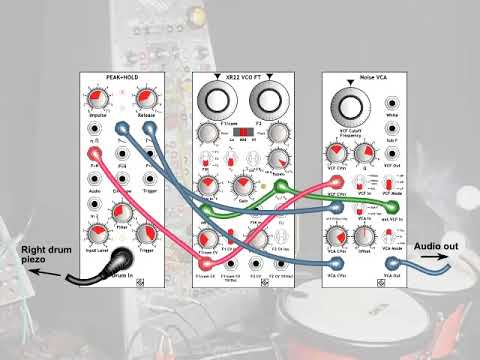 Similar to a ‘Sample & Hold’, the Peak+Hold detects an input signal’s amplitude when triggered and keeps it as a hold voltage until the next trigger appears. But in contrast to the S&H, which keeps the signal amplitude at its momentary level, the P+H holds it on the highest detected point (peak).

The following incoming signal resets the Peak+Hold again by triggering at a very low amplitude point at the beginning, and the next hold value will be set. This trigger threshold is adjustable by knob ‘Trigger’. Further, there is a special ‘Filter’ knob allowing to adapt the P+H to various input signal sources, such as drums or cymbals. Because one have to make a compromise between fast response and minimal noise susceptibility, the internal envelope signal needs to be filtered. This special lowpass filter is only affecting the falling edges of the envelope, ensuring minimal latency and best response to all percussive input sounds.
‘Impulse Out’ and ‘Release Out’ are having a slightly different operation principle in comparison to the Peak+Hold CV generation: After triggering by an input signal from a certain threshold, a minimal latency time is internally set. At the end of this time, the momentary volume amplitude value is detected and generates now the hold voltage on the outputs ‘Impulse Out’ and ‘Release Out’. Duration of the impulse signal can be regulated by knob ‘Impulse’, length of the release time by knob ‘Release’. 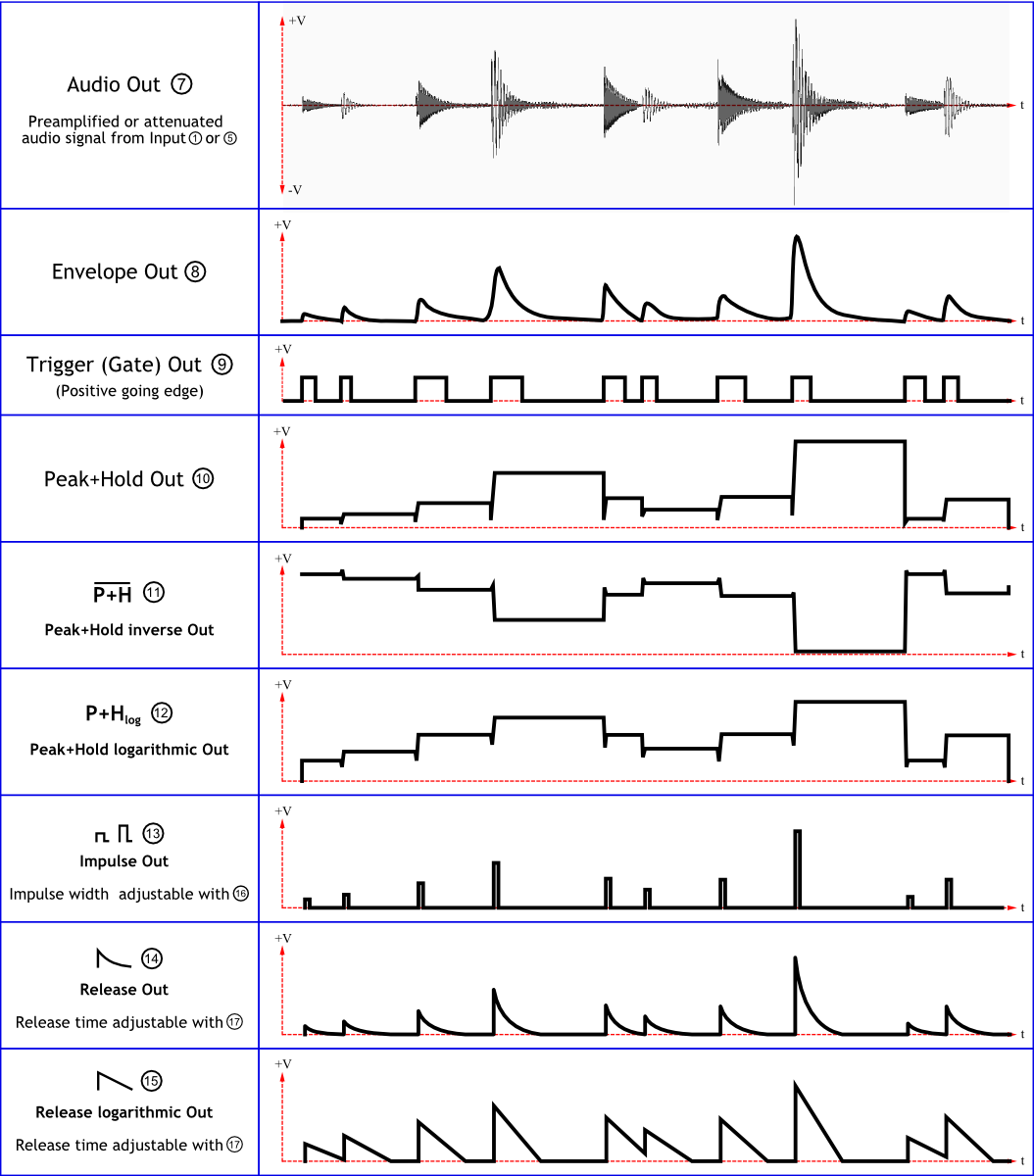 There is a piezo pickup and double-sided adhesive tape included to the Peak+Hold module package by standard, so it is easy to connect the P+H to any percussive instrument. The pickup is equipped with 1/4′ jack and 2m cable.

1. Peak+Hold controlling the XR22 VCO FT The Peak+Hold‘s linear release output is connected to the XR22VCO FT‘s AM input and controls the VCO’s sinewave/triangle output amplitude.

3. Peak+Hold and X multipliers The Peak+Hold ‘s logarithmic release output is connected to the control inputs of 2 X multipliers. The multipliers are working as exponential VCAs with different operation points (see different positions of knobs ‘Offset’ and ‘Level’). The 2nd X multiplier only gets active from a certain CV amplitude level.

4. Peak+Hold with Pre When running the Peak+Hold with the Pre (The preamplifier’s output is applied on ‘In 2’ ), the Pre‘s knob ‘Sensitivity’ is overtaking the function of the Peak+Hold knob ‘Input1 Level’ (which is only referring to input socket ‘Drum In’).